People often need the money the may get back from any tax refund, but for those who may not need it, giving it to charity is a great way to support organizations, but how many know who to give it to, or how to do it?

One thing some people don’t know (surprising as it seems) is how to get money back that they maybe owed from IRD – perhaps education on this is needed, the endless ads on TV don’t seem to be getting through.

How they do this needs some diplomacy and factual information being shared – one would hope organizations have the information and ‘tact’ to ask their supporters the right way if they would consider donating their tax refund.

To send a form with the charity details already completed is a little pushy and could backfire. Not only would an organization run the risk of the person not proceeding with the form, but they could also totally withdraw their support.

It would also be prudent for an organization to check with their accountant as to how tax-back donations are treated, the best way to manage approaches to supporters.

Inland Revenue also has information on their site about refunds, transferring any monies due.

When talking to supporters about donating any refund, it’s also a good time to remind them about Payroll Giving which allows someone to donate to approved organisations directly from their pay and receive immediate tax credits that reduce their PAYE payable. For more on this is available on the IRD website.

Have you asked your supporters to donate their tax refunds, are you actively promoting payroll giving as a means people can support, if so what feedback, response have you had?

Since payroll giving was introduced, nearly $4 million has been donated directly from a growing number of peoples’ pay to their favourite charity or donee organisation. Read more

Since 7 Jan 2010 when Payroll Giving became an option, around $2 million has been given this way, is this a lower level of take up than was to be expected; from feedback received it would appear it is, at least from charity point if view.

There is likely several reasons for the low uptake:

· lack of understanding on the part of employers

· lack of knowledge and understanding on the part of employees

· lack of promotion as a way to give by charities

There are likely other reasons, but for now we’ll focus on the points above.

If employers are uncertain about how payroll giving works and how it can be implemented and promoted in the workplace how are employees going to get involved.

There’s also the possibility that some employers may have only advised staff about the opportunity to give through payroll giving for organizations that were close to the heart of the company, thus making staff feel that they were the only options, therefore not giving staff the opportunity to support their chosen causes.

With about 794,000 people in employment being committed givers (ie: making regular contributions of time or money to causes that are important to them), you would think that the amount being given through payroll giving would be higher than the current figure.

It could be that people are still unsure about how payroll giving works, or it could be other factors – perhaps people are giving to their chosen causes already and don’t want to change they way they are giving, or are there other reasons?

Anyway that improves, makes it easier for supporters to give will help ensure they are active and regular givers to causes – if we’re already supporting a cause through payroll giving, we should be telling others about it.

As a cause are you actively promoting payroll giving as a way to donate?

Are you giving through payroll giving?

Is your workplace active in payroll giving? 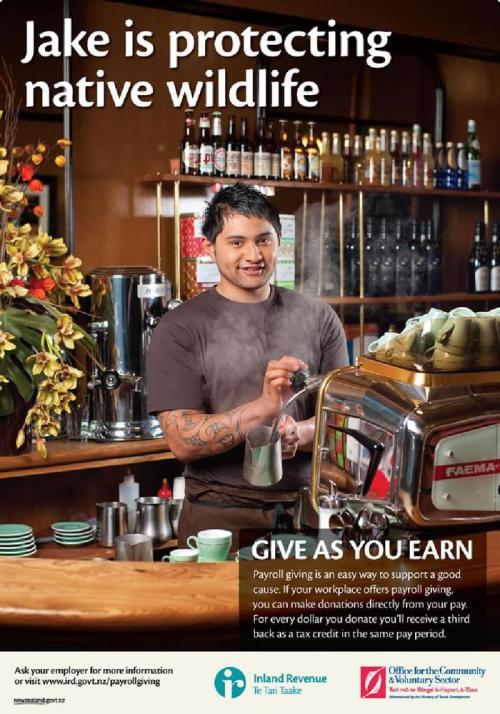 We all try to do what we can for charitable organisations in our communities; and often people struggle to work out who to give to, how much to give and; when to give.

In essence Payroll Giving simply allows for donations to go directly from someones wages to a chosen donee organisation. The employers has to introduce the payroll giving programme to the firm for individuals to participate though.

What makes it simpler is that it’s run through the PAYE tax system, so people whose employers introduce the scheme get tax benefits of their donations each payday, negating the need to collect and hold donation receipts or wait to claim at the end of the tax year.

With some research showing that that over 794,000 people in employment are committed givers (ie: making regular contributions of time or money to causes that are important to them).  It possible for some of these to likely get money back that they otherwise might have missed out on by not bothering to claim in their annual tax return; which some have said makes “donations more affordable”, this could have the flow-on effect of encouraging more people to give and for more to look at increasing their level of giving.

What’s surprising is that according to the latest update from Revenue Minister Peter Dunne is donations for the month of March 2011, reached $540,000 – a monthly record since payroll giving was introduced.

It would seem that charities need to do some work to educate their supporters, and the community that payroll giving is an option that can be used for giving. In discussions I’ve had some charities are finding it hard to get the opportunity to talk about it, and some are being met with resistance from employers not keen on letting their staff know about the option to give immediately from wages.

It’s staggering to think that of the many thousands of people who give only 5,100 gave directly from their wages in March 2011. Are employers letting their staff know? I’d guess they’re not – as I mentioned above some see it as something for the too hard basket.

Charities need to be proactive in letting people know that they’re able to give directly, what the benefits are and what drives people to use payroll giving as a way to give – this will give them the potential opportunity to gain more through its use. Using some of the points from Payroll giving for individuals will help to give supporters some insight into why, employers can check Payroll giving and your employees.

Charities can’t let the opportunity to slip through their fingers and must make the effort to let people know it’s another way they can help, using newsletters, adding a footnote to email notifications and any other opportunity to get word out.